The Insider's Guide to Intake Systems

The Insider's Guide to Intake Systems

The cold air intake enhances the amount of power available to your engine. It lowers the temperature of the air entering your combustion chamber, allowing it to burn more effectively in your combustion chamber. The engine's power is boosted when the cold air temperature is maintained at a certain level. For combustion to take place, an engine requires a precise balance of fuel and air. When compared to warm air, cold air is substantially denser and retains far more oxygen per volume. More oxygen molecules entering the combustion process results in a more efficient burn and more power during the combustion process itself.
As a consequence, greater horsepower is available while fuel efficiency is improved. In most cases, cooler or colder air intake is the reason why most cars run better in cooler or colder weather. Engines that operate in hotter areas need more accurate timing to ensure that adequate cool air is delivered to the engine during operation. In addition to improved throttle response and horsepower, a properly operating cold air intake results in significant improvements in fuel efficiency. Cold air intakes are standard equipment on the majority of cars. According to some experts, they suck in warmer air and their placement in the car prevents sufficient cold circulation from circulating. These stock intakes will not improve the performance of your engine or improve your fuel economy to the same extent as high-performance cold air intakes would. High performance components, such as the dynamic APC (American Products Company) or performance-improved AFE (Advanced Flow Engineering) cold air intake, will provide a more efficient combustion process and boost horsepower and torque output by providing the coldest possible airflow.

Manifold for the intake of air.

When the engine is running, the intake manifold is a network of channels that sends the balanced air and fuel mixture into the intake ports located in the cylinder head. It is common for the flow to progress from the throttle body into a chamber that feeds individual runners, which in turn lead to individual intake ports. It is possible to improve the performance of your engine by configuring the intake manifold to optimize the pressure pulses that enter the intake system. In order to take advantage of these facts and create more horsepower and torque in the mid-range, a high-performance or bespoke manifold is intended to be installed. 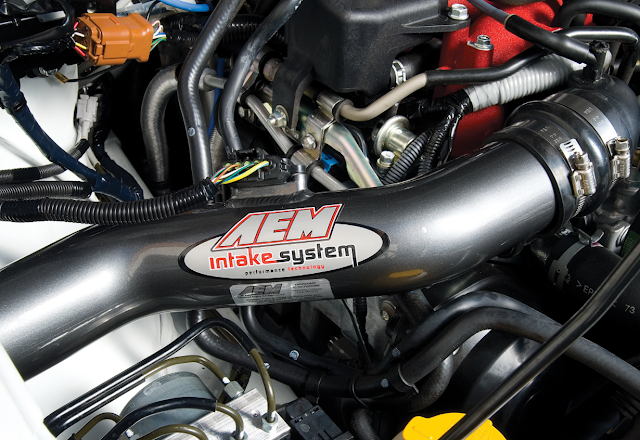 A fuel injector is a kind of device that delivers fuel to a vehicle's engine.

The fuel injector is responsible for the transfer and atomization of the fuel. Like many other engine components, the fuel injector has a limited performance life and must be changed on a regular basis. The fuel injection pump disperses extremely precisely calculated quantities of fuel via the lines that lead from the fuel pump delivery system to each injector, which is controlled by the engine management system. This, in turn, causes the injector to atomize and send fuel to the pre-chambers where it will be used for internal combustion. When an injector becomes unclean or "gummy," the engine's performance may be significantly diminished, and the injectors should be changed. When the spring compression strength gets less, which is generally due to wear, the pressure of the gasoline within the injector will surpass the pressure exerted by the spring. Obviously, this is not something you want to happen since it may cause the injector to remain closed, give an insufficient quantity of atomized fuel, or inject fuel at the incorrect time to be properly burned, either too soon or too late, resulting in a loss of performance.
Also possible is the transfer of fuel to the pre-chambers that has not been finely and adequately distributed or atomized prior to combustion. It is likely that poor engine performance and maybe irreparable engine damage will happen as a consequence of this. When a gas engine is pinging or a diesel engine is nailing, it is a telltale sign that something is wrong. The sound of nails being driven into a diesel engine will be considerably louder than the ping of a gas engine and will sound like metallic hammering. Engine damage may be exceedingly expensive and troublesome, to say the least, if not repaired immediately. Additionally, it may produce excessive engine smoke and faults in the pre-chambers if the qualifying conditions are very difficult to meet. It has even been known to cause them to shatter or explode in rare instances. The bottom line is a self-evident conclusion: replacing your fuel injectors before this sort of damage happens will save you a lot of money on expensive repairs.

The fuel pump is the most important component of the fuel delivery system that delivers fuel to the engine of your car. When you press the accelerator pedal, its job is to provide gasoline as rapidly and effectively as possible. Fuel supply to the carburetor or fuel injection system will be inadequate if your fuel pump is not performing properly, if it creates lower than usual fuel pressure, or if it leaks. As a result, your vehicle's performance will be reduced. If your fuel pump is not delivering the appropriate fuel pressure to the combustion chamber as intended, you will not be able to get enough gas into the combustion chamber.
Clean fuel is critical to achieving peak performance levels. When you replace your fuel pump, be sure you also replace your fuel filter with a new one. This is a critical step in preventing pollutants from entering your fuel system. Clean gasoline filters also help to ensure that there is enough fuel pressure. Strainers for electrical fuel pumps perform a similar function, and the quality of the fuel lines and hoses may also have an impact on performance. Don't forget that not all gas stations have the same kind of gasoline pumps. In general, the fuel pump is specific to your vehicle's model and has been engineered to provide the best possible performance for your engine.

To be honest, this one is quite self-explanatory. It is in charge of regulating your fuel pressure. In addition to delivering power and reactivity during acceleration, a properly running fuel pressure regulator will also improve fuel economy. The addition of an inbuilt pressure gauge function to certain performance pressure regulators enables precise control of fuel flow down to the milliliter.

It doesn't matter where the oxygen sensor is positioned; it has everything to do with the vehicle's intake system. The oxygen sensor is responsible for monitoring the amount of oxygen present in your vehicle's exhaust. The sensor is split into compartments by a U-shaped rod that runs through it, with exhaust venting into the inner compartment. As a result of the oxygen content, an electrical impulse is formed, and the intensity of the signal (which corresponds to the oxygen content) is sent to your vehicle's on-board computer. After that, the computer estimates the amount of oxygen present in the exhaust. After analyzing the data, the computer adjusts the amount of fuel delivered to the engine's intake to achieve the proper air/fuel combination.
This increases both the fuel efficiency and the performance of the vehicle. Oxygen sensors have a limited lifespan and are susceptible to failure. When an oxygen sensor is worn, it will give less precision and may indicate an inaccurate oxygen concentration in the exhaust. As a consequence, the on-board computer may make improper changes as a result of the worn oxygen sensor. This might result in either a rich or a lean air/fuel combination, depending on the circumstances. If your vehicle's "check engine" light turns on and it is not working properly, the oxygen sensor should be checked. According to some experts, replacing the oxygen sensor every 60,000 miles is important to keep the vehicle performing at its peak.