After World War II, some of the Detroit iron produced between 1945 and 1980 may be termed "Rolling Art." Packard, Hudson, and Studebaker all halted production at some point during this period, although they, along with the Big Three (Ford, GM, and Chrysler), did produce some very great automobiles.
Growing up, I used to sit in my tree house and daydream about the huge finned monsters I saw in automobile magazines. I was barely old enough to consider obtaining a driver's license. After careful deliberation, I'd place them in order of how much I liked and wished I had each one's look and attributes. There is always an option.Will a single set of back antennas and spotlights be enough, or do I need two of each? The wire wheels and the two and three-tone paint jobs were a lot of fun. As a rule, I prefer neatness over a cluttered appearance, and this is why I always gravitate toward the simplest designs. Power windows and air conditioning were always preferred over dangling fuzzy dice from the rearview mirror. I always went for the largest V8 and dual exhaust, since they let the engine breathe easier and provide a better sound.
From stodgy, modest, and practical in the late 1940s and early 1950s to a sleeker, more powerful design, the decade of the 1950s witnessed a race to increase size, power, and chrome.
Even while some models went over the top, others managed to incorporate fins, tons of chrome, and eye-popping color schemes into their designs that were quite enjoyable to look at. There were many victors and losers, but American automobiles of the era could easily cruise along the nation's busiest interstates without a worry in the world.
Even in the most luxurious vehicles, straight 6 and 8 motors quickly gave way to V8 engines that could not only move two tons of iron, glass, and plastic but could also do it at a lower rpm than the previous high torque, low rpm straight eights. By the mid-1950s, V8 engines and 12 volt electrical systems were commonplace in all American automobiles; 14 or 15-inch wheels were also common.
It was a moment in American history when each new automobile year was met with excitement and expectation as each model strove to grab the spotlight with its own individual personality. There were no complex or even nave goals in mind. Use large areas of sheet metal and chrome, bright colors, and a plethora of buttons to entice customers. Despite the fact that seat belts were used as a selling point on occasion, the buyer didn't care about them since they didn't serve as a status symbol. 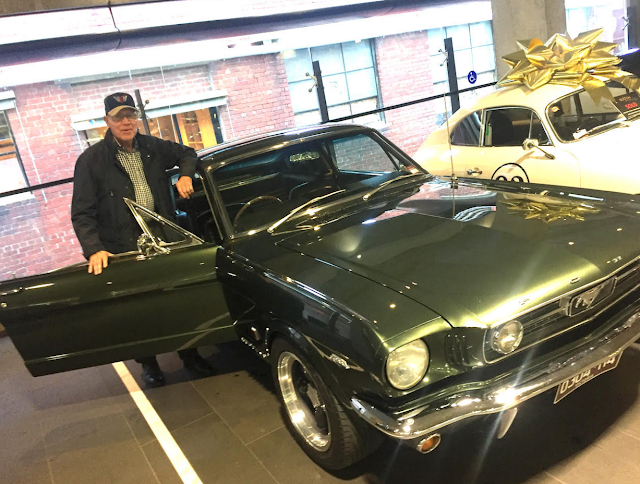 The advancement of technology, as well as convenience and power alternatives, has progressed at a steady pace throughout time. Radial tires were a huge improvement since they eliminated pounding, quick tread wear, and a slew of flats while also improving safety and lifespan. The inferior drum and shoe technique, which may fail in an emergency, was replaced by the superior disc brakes, which provided a significant increase in safety. Automatic gearboxes went from being an optional extra to being included as standard equipment for many vehicles. The radio has, of course, advanced as well.
When signal seek or "wonderbar" AM radios were first launched in 1955, transistor versions that enabled "immediate on" instead of having to wait for the tubes to warm up came shortly after. FM radio made its debut in the 1960s, offering commercial-and DJ-free programming for the first few years. Of course, it didn't last long after the bandwidth was established. By the 1970s, 8-track tape players had become common, and they were quickly replaced by cassettes.
When it came to large rear fins on a car, the greatest was the 1959 Cadillac, followed closely by the 1959–60 Chrysler and DeSoto. Another year and the DeSoto would be extinct, like the Packard, Hudson, and Nash before it. Some kind of sobriety seized automobile manufacturers once the fin and chrome frenzy had gone. The 1960 Pontiac, 1961 Buick, 1962 Cadillac, and 1964 Ford were some of the most stylish automobiles of the era.
Chrysler introduced industry-leading strategies on a regular basis. During the fifties, their Hemi (hemispherical head) engine and Torqueflight gearbox were sheer muscle and dependability. The "Forward Look" debuted in the late Fifties, and it stayed at the forefront of fashion for a time. Then, in 1965, they delivered some very durable and elegant automobiles that, by the decade's conclusion, had given rise to the revolutionary fuselage automobiles. Large, slick machines with an air frame sculptured appearance caught my eye immediately. Although Chrysler's quality control began to deteriorate at this time, it wasn't until several years later that the company was able to get back on track.
Detroit's fortunes began to deteriorate in the late 1970s. Automobile manufacturers that neglected quality control and mechanical efficiency were forced to clean up their acts as a result of the law. There were many different ways to cut emissions, but the most common was a complex system including several vacuum lines and fuel injection systems that were complicated and sometimes poorly thought out, and customers were left dissatisfied as a consequence.
Japanese automakers quickly filled the hole, and the United States has never regained its preeminence in automobile manufacture.
Granted, the quality of American vehicles increased substantially over time, but by that time, the market had become fragmented. I've lost interest in Detroit since the mid-eighties, despite the fact that there have been some fantastic automobiles made since then. Since Americans are so fickle when it comes to SUVs and the world's resources, I'm afraid MoTown manufacturers are on the verge of bankruptcy as a result of their overindulgence and lack of vision in the face of global realignment.
The American automobile was at its peak and started to fall from the 1950s through the 1970s. The mix of art deco and modernism gave way to downsizing and competition from outside the United States. ' As a result, the company's management also failed to adopt new notions of quality control quickly enough, preferring to advertise its automobiles via deliberate obsolescence.
While the 1920s and 1930s produced some of the finest American rolling art works, the 1950s seemed to be the pinnacle of American automobilia, when form and function took on new vigor and vitality, and the most unique product of the empire was born.